Watch and Listen to Alice L. Luckhardt, a local historian and Board of Directors member at Stuart Heritage Museum, as she takes you back in time to learn about the history of Downtown Stuart in 360 Degrees.The Sailfish Historical Art Markers are five locations in and around Downtown Stuart, Florida that represent areas with historical significance. 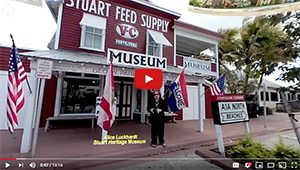 These five areas are an important part of why Stuart is the wonderful, beautiful town it is today.  Located on the East Coast of Florida in Martin County.

On a hot summer September day in 2017, I decided to film my favorite park in the world – Central Park in New York City.  This wasn’t just any ordinary filming…it was filmed using a 360 Degree camera, capturing live video in fully immersive 360 degrees. 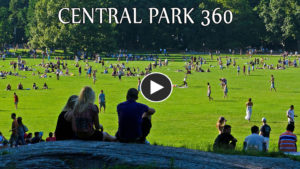 There are an extraordinary amount of unique locations in Central Park, so I had to narrow down my stops.  I decided on 27 total locations.

I hope you enjoy these unique videos.  You may view them on your computer, tablet, or smartphone.  Be sure to rotate all around to get the full 360 degree effect.

Cat Overload!!!  360VRguy recently partnered with Domino’s House Cat Rescue League to produce a 360 Degree Videotour Video of their facility, located in Palm City, Florida.  Domino’s House is a non-profit 501(c)(3) special NO-KILL, cage free, adoption cattery, offering a healthy, safe and loving environment for kittens and cats. It is a place where cats can become kittens again and kittens can grow up to enjoy the love of a caring family when adopted. 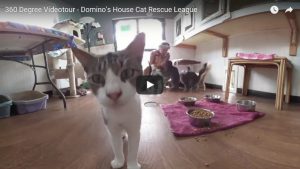 This six minute video introduces you to what Domino’s House is all about – from the origins to the everyday activities by their wonderful owners, employees, and volunteers.  Learn all about how the cats are taken care of, the different areas available to all the different cats, and how you can help.

Viewing 360 Degree Virtual Reality video is a very unique experience, either it on a Smartphone, Tablet, Laptop, or Personal Computer.  It is beginning to become “Mainstream”, and can be found on the popular social media sites like Facebook and YouTube.

Where 360 Degree/Virtual Reality video really shines is on a VR Headset.  This is an experience that has to be seen to be really understand – it is too hard to explain with just words.

At Treasure Coast Multimedia, home of 360VRguy, we can give you a free demo of Virtual Reality on a Headset.  We use the Samsung Gear VR Headsets, due to the high quality and build of the product.  We can show you a tour of Molly’s House, Dominos Cat Rescue League, St. Simon’s Island, GA, Downtown Stuart Riverwalk, or one of the many VR Games or Educational Apps on the market.

Please Contact Us to schedule your own private demo.

360VRguy has partnered with Molly’s House to produce a fully immersive 360 Degree Videotour, showing off all aspects of their wonderful home.  Molly’s House, a purpose-built Hospital Hospitality House located in Stuart, Florida, has been keeping families together by providing short-term, affordable accommodations for the families of hospitalized loved ones and hospital outpatients since 1996.

The 360 Degree video shows Debbi Greer-Denning giving a tour of the home, including the Living Area, Library, Kitchen, Guest Rooms, and Backyard.  You can view this video on a computer, tablet, or your smartphone.  For a more unique experience, use a VR Headset to get the full 360 Degree views. 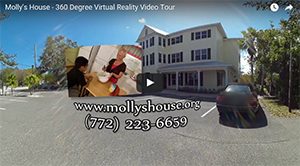 360/VR Videos are Perfect for: